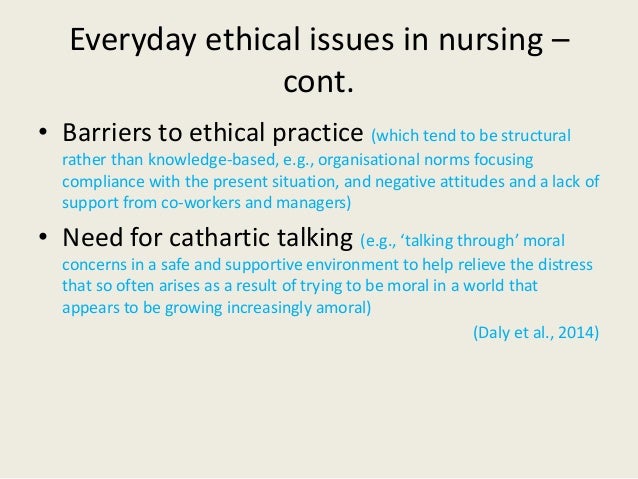 Nurses are the ones who most often see patients and family members struggling to make crucial, sometimes excruciating decisions. They're often the ones who know that the patient or the family is not comfortable with current treatment. We're very closely connected experientially, and that's different. It puts nurses in the thick of things, ethically. And then when you add in that we all have our own ethics and beliefs that may collide with the patient's or the organization's or other caregivers' set of ethics, it's complex and it's messy.

Nurses have to find a way to reconcile their own moral values with the obligations of their profession. Cross' experience in the delivery room was seen through her own unique lens—when she was 14, she was raped. She awoke one morning feeling nauseous and suffered a miscarriage in bed. She says she didn't know how to cope with the loss and experienced symptoms of post-traumatic stress disorder. That experience has followed her through life and was a big part of her decision to become a champion for girls and women dealing with loss. While she chose to put herself in this situation, many nurses don't get to choose. They are more often in a support role and don't get to elect whom they care for, even if that comes into conflict with their values.

They can make decisions on whether they're going to provide services to them, whereas, for nurses, that option is quite limited in general. You generally get assigned based on what patients need, not what you want, not what you prefer. And what that really highlights is that we take care of everybody, regardless of their diagnosis, their gender, their culture, their socioeconomic status, their race.

We take care of everybody. Rushton says the nation is at a tipping point in health care. With more than 3 million nurses in the United States—the largest segment of the health care workforce—any conversation about impending challenges of caring for aging baby boomers or the advancement of technology is deeply tied to nurses and can lead to new ethical challenges and moral distress. Just because new technology can keep a patient alive, does that mean it's the right thing to do? How best to allocate limited resources to a growing patient population? How can hospitals continue to deliver quality care for ever more patients when the workforce is not growing at the pace needed to keep up?

Ethics can be the elephant in the room. Nobody wants to talk about it, but it's not going anywhere. People aren't always comfortable talking about the deeply held personal values that shape their personal sense of ethics. They fear being judged, or confronting people who see a situation as categorically right or wrong instead of shaded by individual ethical considerations. It's a gray area in a profession that values black and white, that values precision and decisiveness.

Is the bone broken? Does the patient have an infection? Has the tumor spread? What is the dosage? What is the prescribed treatment? Moreover, nurses may be too busy to stop and think about some of their frustrations as actually involving ethical dilemmas. It's embedded in our choices, in our behavior, in our character, in how we do our work every day. When you think about ethics in that way, it's important for the foundation of nursing to be grounded in ethical values so that we've got a firm foundation to operate from. And I see nurses who start their careers, and they have that same passion.

And then when I see them two years later, they are depleted and burned out, and to me there's something wrong with a system that does not engage that passion and commitment. It's a loss. It's a big loss to the profession, and also to the people we try to serve. It does no one any good to expend the time and energy to train nurses and then have them leave the profession in less than two years.

That is not a good return on investment. Rushton is a leading force in nursing ethics. As a professor of clinical ethics as well as a professor of nursing and pediatrics, her personal mission is to give nurses a voice and to see conversations about ethics happen on a daily basis as a part of routine health care, instead of being an afterthought or occurring only when things reach a boiling point. She's been working on it for more than 30 years and feels like she's making headway. Rushton speaks with an enthusiasm and optimism not always associated with conversations about death, moral distress, and professional burnout.

The committee provides recommendations to health care workers, patients, and their families on how to proceed in cases where ethics are a factor. Rushton says nurses are a big part of its consultations. She gives the example of an elderly man with cancer who now was going to die. He had undergone multiple operations on his abdomen, which had left him with a host of complications.

The man and his family knew that death was imminent, but they requested that he continue to receive donor blood until he passed away. The medical team, including the nurses, understood the family's wishes but faced a dilemma: Donor blood was in limited supply, and a transfusion now would not help the patient. So the ethics committee was called in.

They spoke with the family and conveyed that unlimited transfusions in this case were ethically unjustified. Rushton says she wants such conversations to happen before there is an ethical crisis or confrontation. She and her colleagues have begun to lead ethics rounds, during which they meet with the health care team, patients, and families to normalize conversations about ethics. To the health care team: How do you feel, ethically speaking, about the current course of care? Have you discussed the ethics with the family?

To family members: If the patient could speak right now, what would she want us to do? Has she expressed any preferences in the past? The rounds are almost like educational icebreakers—they rotate among departments as a way to jump-start conversations about ethics. Rushton says her hope is that even after she leaves the department, health care teams across the hospital will continue to think and talk about ethics in everyday practice.

While many hospitals have codes of conduct or guidelines to ensure quality and safety, fewer give the same attention to ethics. The Johns Hopkins Hospital's Code of Ethics in Patient Care articulates the hospital's values—respect for cultural traditions, patient autonomy, confidentiality, and so on—and how those values should apply to decisions on everything from mandatory flu vaccinations to allocating scarce supplies, staff, and space. Individual departments are taking steps to do what they can, as well.

The Kimmel Cancer Center, for example, has initiatives in place to support nurses as they deal with the moral distress that comes with treating long-term cancer patients, according to Sharon Krumm, administrator and director of nursing for the center and an associate professor at the School of Nursing and School of Medicine. The center has a staff chaplain to discuss dilemmas with nurses, and she feels her team is empowered to speak up. Nursing and Human Rights. Butterworth Heinemann.